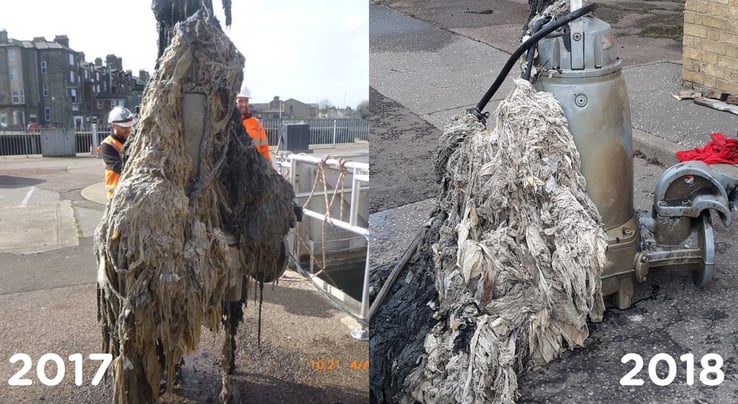 Anglian Water is working with the Marine Conservation Society to stop 'unflushables' causing blockages and harming wildlife. UK water companies spend more than £88 million on nearly 400,000 sewer blockages each year, up to 80% of which are caused by unflushable items like wet wipes, cotton buds, and sanitary towels, and fats, oils and grease

Blocked sewer pipes can flood people's homes and gardens, which can cause environmental pollution to impact wildlife and water quality. The Marine Conservation Society's (MCS) 2017 Great British Beach Clean weekend found over 18,050 unflushable items littering our beaches in the UK. An average of 27 wet wipes was found for every 100m of beach cleaned, up 94% from the previous year. Since unflushable items often contain plastic they are adding to the amount of plastic pollution damaging our oceans and the wildlife that live in them.

Anglian Water and the Marine Conservation Society have been working together to create a long-term change in how people dispose of wet wipes, other sanitary items and fats, oils and greases. The pro­ject aims to reduce the number of unflushable items entering the sewer system and in turn reduce sewer blockages, pollution incidents and the amount of plastic pollution in our seas and on our beaches. This joint project is set to run from July 2017 to 2020 and MCS hope to see a decrease in unflushable items found on beaches in the region during the Great British Beach Clean from this year onwards.

It builds on a 2016 MCS national aware­ness raising cam­paign which was backed by eight water companies, including Anglian. As part of that campaign MCS and water compa­nies engaged the main UK retailers by taking them into the sewers to see the impact of flushing wet wipes first hand and discussed how labelling could be improved. 12 retailers commit­ted to reviewing the flush-ability and labelling of their own brand flushable wipes, and making their flushable wipes plastic free.

By working together with water companies the campaign reached a wide audience, creat­ing a strong national voice, with a difficult message; more than 10,000 people signed the petition for better labelling, the campaign engaged I 00,000 people on social media, achieved a 13.9 million media reach and 23% awareness of the campaign by the general public.

Anglian Water this year have provided funding and staff time to adapt MCS's pre­existing wet wipe monsters graphics and added a new fat's, oils and grease character. These have been put onto a large number of the company's fleet of Water Recycling commercial vehicles, as well as included on their website and educational materials, to ensure that the message reaches their customers. 'Wallace' the wet wipe mon­ster mascot also attended an event recently at the beach at Southend-on-Sea with Anglian Water staff to raise awareness of the campaign and partner­ship for World Oceans Day.